Lagoon Lemna: Pros and Cons of Duckweed in a Wastewater Pond

Lagoon lemna, or duckweed, has been a popular topic on our Lagoons Do It Better Facebook group lately. That’s because, like algae and sludge, duckweed is just one of those things that comes with the territory. In our latest episode of LDIB-TV, Patrick Hill gives the lowdown on duckweed. Watch the video and read below for highlights. 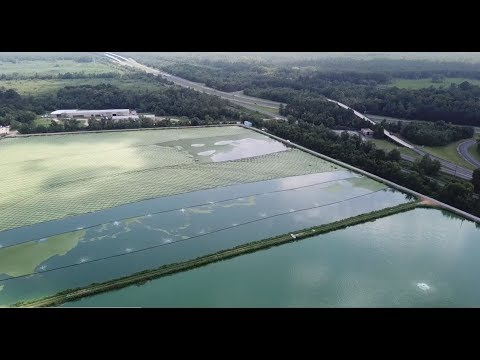 Lagoon Lemna minor, or common duckweed, is an invasive, rapidly growing aquatic plant that thrives in quiescent or slow-moving water.

It’s found all over the world, except in the coldest environments. It spreads easily, either through water channels or by hitching a ride on unsuspecting mammals or waterfowl. Once it lands in a nice quiet spot, it proliferates rapidly, doubling its biomass every two days with the potential to completely cover an acre of surface in 45 days.

Duckweed is often mistaken for algae since they’re both green and cover water surfaces. Although they may look alike from a distance, algae and duckweed are competitors.

Despite their similarities, duckweed and algae are different organisms. Duckweed forms in discrete individual flowers, while filamentous algae form in mats. To tell the difference, stick your hand in: Duckweed will separate, while algae will stay clumped together. Overabundant duckweed outcompetes algae, blocking the sunlight that algae need to grow, reducing dissolved oxygen (DO) levels and BOD treatment. Less algae, especially in a polishing pond, is a good thing.

Duckweed is not beneficial to a typical wastewater lagoon, but compared to algae, it is the lesser of two evils. Algae will cause BOD and TSS to skyrocket, which can cause a lagoon facility to violate. Unless you have an effluent DO limit, duckweed by itself will not put you out of compliance. Ideally, duckweed growth should be controlled and not allowed to take over completely.

Lagoon duckweed needs to be kept in check. Here are some options:

Remove physically: In the video, Patrick shares his experience removing duckweed from a lagoon by creating a boom from a rope and pool noodles, dragging the duckweed to the corner of the lagoon, and pulling it out with a pool skimmer. He describes the operation as effective but labor intensive.

Duckweed can also be pushed to the edges of the lagoon with a firehose or powered sprayer and raked up from the shore. Because duckweed is laden with nutrients and pathogens, it must be disposed of in a manner that prevents these contaminants from being released into a waterway. This is a very labor intensive and time consuming method, and, because duckweed grows so rapidly, nearly impossible for an operator to stay on top of.

Use lagoon additives: Aquatic herbicides can be very effective, but may be restricted, especially for discharging lagoons. Check with your local environmental department for recommendations and permits as required, as these chemicals can affect water quality. It’s much easier and less expensive to spot-treat new duckweed infestations before they get out of hand. Also, if too much duckweed is killed off all at once, the decomposing plants will create an oxygen demand that will exacerbate anaerobic conditions and odors. Watch our video interview with John Dinneen of Aquafix (teamaquafix.com) for insight into how algaecides, bacteria, and catalysts can treat duckweed and algae.

Go Fish: The United States Forest Service used grass carp to control duckweed in a ranger station wastewater lagoon in Idaho. Nine triploid carp, which are incapable of reproduction, were added to the lagoon; after a year, most of the duckweed was gone. The carp didn’t interfere with the wastewater treatment, and were much less expensive than the cost of manually removing duckweed from the lagoon. This can be an effective natural solution if there is sufficient DO to support the fish and if there are barriers in place to keep them from escaping.

Improve surface action: Duckweed likes stagnant water, so any movement on the water’s surface will prevent it from taking over. Enhance wind action by removing any barriers, such as plants, trees, or solid fences. The mixing capabilities of Triplepoint’s Ares Aerator® keep the surface of the lagoon in motion, preventing duckweed and algae from proliferating while maximizing aeration and oxygen transfer.

What’s your experience with duckweed? Other operators would appreciate your expertise. Join the Lagoons Do It Better Facebook group now!