October is here—time for football, apple cider, falling leaves, and seasonal lagoon turnover. Although less extreme than the spring transition, autumn’s cooler temperatures cause destratification and may trigger lagoon turnover and corresponding odors. In this short article, we’ll talk about the causes of fall lagoon odor and how to prevent it.

What Is Seasonal Lagoon Turnover?

An improperly mixed wastewater lagoon will settle into layers during summer, with denser, cooler water at the bottom and warmer water at the top, which is known as thermal stratification.

This thermal stratification can lead to lagoon short-circuiting, where influent, taking the path of least resistance, rides along the warmer top layer of the water, and flows, virtually untreated, out with the effluent. Read our article, How to Prevent Wastewater Lagoon Short Circuit, for ways to identify and correct this common lagoon treatment disruptor.

In the fall, the ambient air temperature cools the top layer of water, creating “thermal instability.” Cold autumn winds accelerate the process. As the layers approach a uniform temperature, they begin to mix and destratify: the now-cooler surface water sinks down, displacing the warmer water at the bottom and dislodging the accumulated, septic solids. The lagoon is said to “turn over”—the top layer of water sinks to the bottom and the sludge can rise to the top, causing floating sludge mats and noxious odors.

In addition, the algae blooms of summer have started to die and sink to the bottom, where they release back into the water column the nutrients they have taken up. Lagoons usually do a fair job of removing ammonia in the summer, but nitrifying bacteria don’t like cold weather. If your lagoon has an ammonia limit, Triplepoint’s NitrOx® Process can upgrade your existing lagoon system to remove ammonia year round.

Floating sludge: As the colder water sinks to the bottom of the lagoon, it dislodges the solids settled at the bottom, which have been quietly anaerobically digesting. The anaerobic digestion process releases gas as a byproduct, which becomes entrained in the sludge. Once dislodged, the gas trapped in the sludge causes it to rise from the bottom of the lagoon and float. For more about sludge, read Causes and Effects of Wastewater Lagoon Sludge Explained.

In an article in the Kansas Lifeline, Kansas Rural Water Association Consultant Jeff Lamfers offers suggestions on how to deal with lagoon odors due to seasonal turnover. He recommends recirculating some of the higher quality effluent back to the affected cell to improve dissolved oxygen levels. Sodium nitrate can be applied, either to the surface, by means of a sprayer; or dragged through the lagoon in a mesh bag attached to a boat. The Minnesota Pollution Control Agency’s Stabilization Pond Systems Manual recommends adding 100 pounds of sodium nitrate per acre on the first day, and 50 pound per acre per day after that, if odors persist.

Lagoon odors that persist for more than a week or so can’t be blamed on lagoon turnover—it’s likely organic overloading. Read Seven Signs of an Overloaded Lagoon to learn how to diagnose and correct it.

How to Prevent Seasonal Lagoon Turnover and Odor

To prevent lagoon turnover in spring and fall, you need to combat the causes of the problem itself: 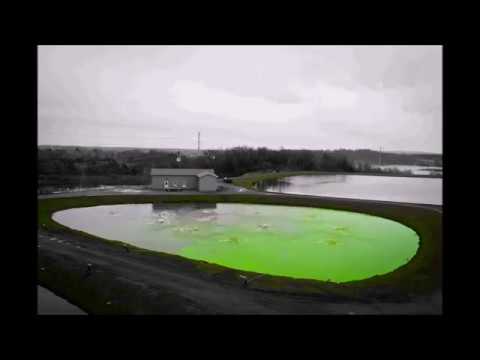 Sufficient aeration and mixing will correct or prevent virtually every cause of lagoon odor. Triplepoint’s Ares Lagoon Aeration unit provides both aeration and mixing, combining the mixing advantages of lagoon coarse bubble diffusers with the efficiency of fine bubble diffusers in a high flexibility, low maintenance, portable unit. For more information, download our Ares Aeration Literature or contact us. We will be happy to help you with your lagoon aeration project.