Smelly lagoons have created the perception that wastewater lagoons don’t work and should be replaced with mechanical plants. Triplepoint HQ is six miles as the crow flies from the Stickney (aka “Stinkney”) Water Reclamation District, which serves the Chicago area and is the world’s largest wastewater treatment plant. Our coworkers who live a little closer to the facility can tell you on certain days when the wind is blowing the wrong way, treatment plants smell! A properly functioning lagoon is for the most part free of objectionable odors; in fact, a smelly lagoon is announcing that it’s not working optimally.

In this video, Triplepoint’s Patrick Hill describes lagoon odors and what they mean and shares some options for correcting the conditions that cause odor. Watch the video and read below for highlights. 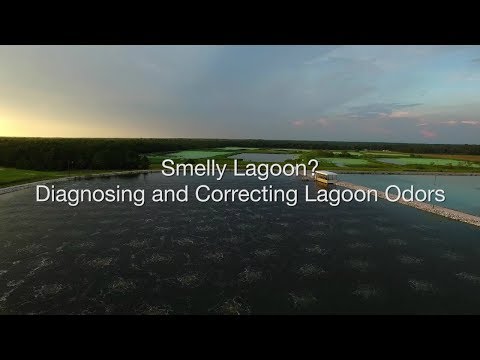 The EPA’s Principles of Design and Operations of Wastewater Treatment Pond Systems for Plant Operators, Engineers, and Managers includes a chart that outlines types of odors and their causes.

Earthy—A lagoon with a mild earthy odor and minimal algal blooms is in good health. It has enough DO to treat wastewater efficiently and nutrient levels are low enough to keep algae growth in check.

Fishy or grassy—A fishy or grassy odor is a sign of algae growth. A fishy odor is associated with cyanobacteria, or blue-green algae. Read our blog, Wastewater Lagoon Blue-Green Algae: The Harm of HABS, for more about these harmful algal blooms.

A grassy odor also indicates algae. While algae is common in lagoons, an excessive amount can mean high TSS and a deceptively high BOD reading.

Septic or rotten egg—These are the odors that generate complaints. A raw sewage odor means lagoon failure: There is not enough DO or circulation to digest influent BOD, so waste just accumulates and digests without dissolved oxygen, or anaerobically. Anaerobic digestion is slow and releases foul odors. In addition to smelling bad, these sewage odors are often blamed for headaches, eye irritation, and respiratory problems.

One common cause of a smelly lagoon is overloading, where the lagoon has exceeded its capacity. Read our blog, Seven Signs of an Overloaded Lagoon, for this topic in detail. Seasonal turnover, when changes in water temperature force settled sludge from the bottom to the surface of the lagoon, can create odor issues for a couple of weeks. Spring turnover odors can be especially aggressive but don’t last forever.

Solutions for a smelly lagoon

Lagoons that only have odors associated with seasonal turnover a couple of times a year require less intervention than lagoons with a persistent odor problem. Increased aeration, recirculation, or bioaugmentation may be enough to mitigate a temporary odor issue until lagoon temperature and DO levels have stabilized.

For a chronic odor problem, it is more cost effective in the long run to fix the underlying cause.  Desludging, correcting short circuiting with baffles, and improving aeration are all potential solutions.

A healthy, well managed lagoon is virtually odorless from a distance, and should not be generating complaints from the neighbors. It has sufficient dissolved oxygen levels to allow the bacteria to break down the BOD. In addition, robust mixing through the water column keeps solids in suspension, promoting aerobic conditions for expedient BOD removal. Mixing also keeps sludge at bay to maximize the lagoon’s capacity and treatment time: Sludge buildup takes up valuable volume that will shorten retention times, and adequate retention time is critical to the lagoon process.

Plus, if sludge degrades anaerobically, it can increase lagoon ammonia levels—also known as fertilizer!—in the water. These fertilizers stimulate algae blooms, which will remove oxygen from the lagoon, thereby increasing your BOD and TSS levels, and potentially causing strong grassy or fishy lagoon odors.

Sufficient aeration and mixing will correct or prevent virtually every cause of lagoon odor. Triplepoint’s Ares Aeration® unit provides both aeration and mixing, combining the mixing advantages of lagoon coarse bubble diffusers with the efficiency of fine bubble diffusers in a high flexibility, low maintenance, portable unit. For more information, download our Ares Aeration Literature or contact us and we will be happy to help you with your lagoon aeration project.