Energy costs for aeration represent the largest expense for a wastewater lagoon facility, so any increase in efficiency directly improves the bottom line. Since aeration systems are designed to be efficient at the lagoon’s full design capacity, they can be inefficient and wasteful at actual flow and BOD levels. In this article, we’ll outline why a lagoon facility can end up significantly overbuilt, and present methods of aerated lagoon optimization to save energy costs.

Is your lagoon facility overbuilt? Design Flow vs. Actual Flow

A major source of aerated lagoon inefficiency is the difference between the capacity the facility was built for and what’s actually coming in. Municipal facilities are rarely operated at their full design capacity; in fact, most run at about 50 percent. This excess capacity is intentionally built into the system to account for future growth and is required by many states’ standards for the design of wastewater facilities.

We’ll use the 10 States Standards of Policies for the Design, Review and Approval of Plans and Specifications for Wastewater Collection and Treatment Facilities as our example. The 10 States Standards is used by Illinois, Indiana, Iowa, Michigan, Minnesota, Missouri, New York, Ohio, Pennsylvania, Wisconsin, and Ontario. Following are a couple of examples of how design standards like this can result in a facility with excessive capacity:

User base: The 10 States Standards requires facility plans be based on a twenty-year planning period, to include current and predicted population and existing and potential service areas. An ambitious and optimistic municipal planning board is capable of overshooting that projection quite a bit. Even if the twenty-year growth projection is accurate, the actual user base is unlikely to be that high for the first decade the facility is operational.

In addition, the 100 gallons per person per day benchmark only accounts for municipal users; flow from industrial, institutional, and commercial users (current and projected) is calculated separately and added on.

Organic loading: 0.17 lbs of BOD5 and 0.20 lbs of suspended solids per capita per day is the 10 States Standards’ recommended minimum capacity for organic loading. Facilities with seasonal variances (from an RV park, college campus, or fruit processor, for example) must design based on the average daily flow and influent BOD5 during their high season, which will result in excess capacity the rest of the time.

Plus there are inherent limits to designing around BOD5. Although the BOD5 test is still the industry standard, it’s not an accurate way to evaluate an aerated lagoon. The BOD5 test isn’t timely, it’s tricky, and it can provide misleading results due to nitrifying bacteria in the sample. We cover this topic in detail in our blog, Are Lagoon BOD Tests Accurate?

The CBOD5 test provides a more accurate snapshot of aerated lagoon conditions, but it’s more expensive and generally not accepted as a substitute for BOD5 tests without permission from the regulating agency.

To sum: To comply with the 10 States Standards, a lagoon’s design is based on the potential population and industrial base for a date twenty years in the future; assumes a hydraulic capacity higher than what the average water use will be; and bases year-round organic loading on the highest season and on a potentially inaccurate BOD5 test. Overestimating all these factors can result in a lagoon facility with as much as four times the capacity of current requirements, and an aeration system designed to be efficient at that level, not where it is now.

In an unaerated lagoon, not much. You’ve got lots of extra room to ensure adequate retention time, for storage, and to cope with peak flow events. More land than what was needed has been used, but the generous surface area allows for good sunlight penetration for disinfection and wind action for mixing and oxygen transfer.

In an aerated lagoon, however, aeration beyond what is needed to mix and aerate the actual BOD in the lagoon is a waste of energy. It is possible to overaerate a lagoon.

The key to optimizing a lagoon aeration system is to determine how much aeration and mixing is necessary to treat the existing flow and loading and to provide only that much.

Following are some tweaks that can help you to determine your actual aeration requirements:

Refine BOD testing: Lagoon guru Steve Harris (H&S Environmental) offers this testing hack for aerated lagoons that have a fairly consistent influent BOD: Supplement the BOD5 test with the more accurate CBOD5 test over the course of a month and compare the results. Determine the ratio of CBOD5 to BOD5—generally, CBOD5 will be 1.5 to 2 times BOD5—and use this number to determine what your actual aeration requirements are, based on providing 1.5 lbs of oxygen per every pound of influent BOD. Most lagoon problems (like poor treatment and odor) can be avoided if the DO level is kept above 2.0 mg/L, but a consistent DO level far above 2.0 mg/L (4.0 mg/L in early spring) wastes energy and puts unnecessary stress on equipment.

Adapt to the seasons: Bacteria are more active during warm weather and require more DO. The surge in bacterial activity during the spring thaw can double a lagoon’s oxygen requirement. The reduction of bacterial activity and superior DO-holding properties of cold water mean less aeration is needed during the winter.

Know your sludge: Sludge buildup exerts an oxygen demand of its own that must be accounted for. Aeration based solely on influent BOD when there are volatile solids lurking at the bottom of the lagoon can mean insufficient aeration. See How to Perform a Lagoon Sludge Survey for more information.

Once you’ve determined actual loading and have accounted for temperature and sludge accumulation, adjustments can be made to the lagoon aeration system. Options for improving efficiency depend on the type of lagoon aeration. A surface aerator, which is run by a simple motor, is either on or off. Surface aerators are often turned off in the winter when supplemental aeration isn’t needed, but at the expense of mixing. Individual aerators can be cycled on and off to save energy but may cause accumulated sludge to form into drifts and encourage short circuiting.

Fine bubble EPDM diffused aeration uses a blower. Airflow can be turned down to save energy but the lower airflow reduces the size of the bubble orifices. The smaller bubbles provide more efficient oxygenation at lower airflows, but mixing power is lost.

Process controls: A variable frequency drive (VFD) can be added to a blower to give the operator the flexibility to adapt to changing treatment demands at the lowest possible energy expense. Blower power consumption is equal to the cube of the speed, so even a minor reduction in speed can result in a significant drop in energy consumption. According to a U.S. Department of Energy Tip Sheet, reducing rotating equipment speed by 20 percent can reduce input power requirements by as much 50 percent.

Investing a few thousand dollars in a VFD can save tens of thousands of dollars in energy costs over the life of a diffused aeration system.

For an in-depth comparison of the relative efficiencies of lagoon aeration technologies, watch our video, Lagoon Aeration 101. 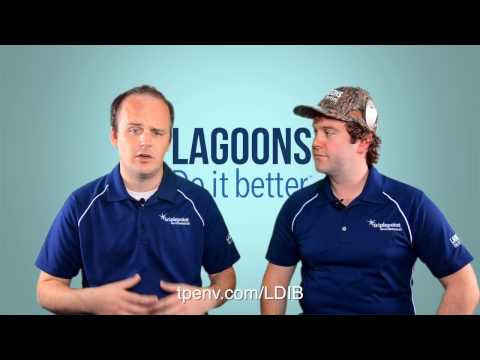 For guidance on how your lagoon system can be optimally aerated, talk to the lagoon experts! At Triplepoint, we’re committed to helping lagoon operators maximize treatment while minimizing capital and operations costs. We can provide you with design calculations, preliminary layouts, and a lifecycle cost analysis to demonstrate how Ares Aeration® can cost-effectively upgrade your lagoon system to meet even the most stringent limits.