Lagoon sludge is a normal part of lagoon wastewater treatment, and it’s usually not a problem until it is allowed to build up in excess at the bottom of the lagoon. In the latest video posted to our Lagoons Do It Better YouTube channel, lagoon specialists Brady O’Leary and Patrick Hill discuss what causes sludge and how lagoon sludge impacts treatment. 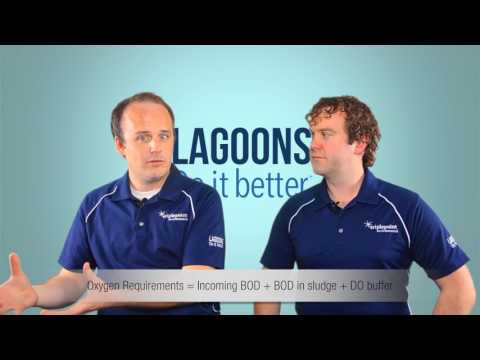 What is lagoon sludge?

Sludge is defined as the biosolids that accumulate at the bottom of the lagoon, composed mostly of dead bacteria, algae, plants, sand, silt, gravel, and insoluble metals. The volatile (biodegradable) components will digest over time; the rest will eventually have to be removed by dredging.

One benefit of a lagoon-based wastewater system is the absence of daily sludge handling. The vast majority of wastewater treatment lagoons are partial-mix systems, designed to accommodate sludge buildup. Typically, the bottom 1–2 feet of the lagoon is designated as a sludge storage area, allowing for the slow anaerobic digestion of solid influent material.

Because sludge storage is built into the cell’s capacity, most lagoons can go several years, or even decades, without requiring dredging. Excessive accumulation of sludge, however—more than 18 to 24 inches—can cause all sorts of problems:

Lagoon odors: With rising gases from anaerobic digestion (most notably H2S—a malodorous sulfur), and the floating sludge mats, unpleasant lagoon odors are released into the atmosphere in a noxious blast. If these odors are picked up by the wind, you could receive complaints from miles away.

Benthal feedback: The benthic zone is the lowest level of a body of water, so benthal feedback describes when components of settled sludge in the benthic zone of a lagoon are fed back into the water column. Benthal feedback can release BOD, TSS, ammonia, and phosphorus back into the lagoon. In fact, we’ve seen cases where the ammonia concentration going into the final unaerated cell is lower than the effluent concentration: the final cell has actually added ammonia to the water.

Because of benthal feedback, the amount of sludge in a lagoon must be accounted for when designing an aeration system. The aeration system must not only cope with the influent BOD and nutrient levels, it must be robust enough to handle the BOD and nutrient deposits that are already there, in the sludge. It should also provide a little extra DO to act as a buffer.

If you believe excess sludge is compromising your lagoon’s treatment capability, good data is key. Measure how much sludge is in the lagoon and what percentage of it is volatile, or biodegradable. Knowing what percentage of your sludge can be degraded and calculating how much sludge there is in total can help you determine the most cost-effective way to deal with it.

See our article, How to perform a lagoon sludge survey, for an overview of the process. If a core sample reveals that a portion of the sludge is volatile, you may be able to break it down in situ and delay having to deal with it for another 5 to 10 years.

Before resorting to costly sludge dredging and removal, it may be worthwhile to try less expensive and disruptive methods:

Bioaugmentation: Adding special blends of bacteria, especially in conjunction with aeration, can jump-start the digestion process and help break down the sludge over time—achieving as much as a 30 percent reduction in volatile solids.

Add aeration or reposition aerators: If there are surface aerators, they can be repositioned to disrupt the drifts of sludge that settle around them due to insufficient mixing. This will resuspend some of the settled solids so they can come into contact with oxygen and bacteria and decompose. Late spring and summer is the time to reposition aerators, because the natural increase in DO allows the lagoon to handle the added load.

The best way to prevent excess sludge accumulation and all the bad things it can cause is through aeration and mixing. A well aerated lagoon keeps biodegradable organic solids in suspension, where they are in constant contact with dissolved oxygen and bacteria, instead of settling to the bottom of the lagoon as sludge.

Triplepoint’s Ares Aerator® provides lagoon aeration and mixing in a single unit. Because it sits at the bottom of the lagoon, it provides robust mixing from the floor to the surface to prevent sludge drifts from forming and causing short-circuiting. Efficient fine bubble aeration maximizes dissolved oxygen levels and biological treatment.

The combined aeration and mixing capability of Ares accelerates the natural removal of sludge—preventing sludge buildup, optimizing the capacity and service life of a lagoon, and reducing the need to dredge.