Whether your facility has a lagoon nitrogen (TN, TKN, or TIN) or ammonia (NH3) effluent limit depends on your local environmental regulatory body, your discharge parameters, and if the watershed you discharge to is impaired. So far, most lagoon permits with an ammonia or nitrogen limit restrict only unionized ammonia (NH3), although some (and going forward, potentially more) restrict Total Nitrogen (TN), largely due to the danger of nitrates in groundwater.

This article will present a simplified overview of the difference between lagoon ammonia and lagoon nitrogen and the biological processes of nitrification and denitrification.

There are many sources of nitrogen in wastewater lagoons:

Nitrogen is present in several different forms in wastewater lagoons:

Total Nitrogen, or TN, is the sum of all these forms of nitrogen:

Total Kjeldahl Nitrogen, or TKN, is the sum of ammonia nitrogen and organic nitrogen:

Most of the lagoon permits we’ve seen limit only NH3, or the gaseous form of ammonia. NH3 is harmful to aquatic life and promotes algae growth and eutrophication.

According to Michael Gerardi in his book The Biology and Troubleshooting of Facultative Lagoons, approximately 75 percent of organic nitrogen breaks down to ammonia-nitrogen in the water. Whether it tends more heavily towards the gaseous (NH3) or ionized (NH4+) form depends on the lagoon’s pH. A more acidic solution, towards the lower numbers, favors NH4+. A more alkaline solution, towards the higher numbers, favors NH3. Since most municipal wastewater lagoons typically have a pH in the 6.8–7.6 range, most of the ammonia will be in the form of NH4+. Even if most of the ammonia is in the ionized NH4+ form, there’s still NH3 lurking around that needs to be removed to prevent damage to the receiving waterway.

Once all the organic nitrogen—urine, cleaning products, industrial chemicals, food processing waste, fertilizer runoff—has entered the lagoon, most of it immediately converts to ammonia-nitrogen, or NH3 and NH4+. Now the nitrifying bacteria start their work, converting NH3 and NH4+ into nitrites (NO2) and then nitrates (NO3).

In other words, given the proper conditions, including a healthy amount of dissolved oxygen, Nitrosomonas bacteria will consume ammonia-nitrogen and excrete nitrites, or NO2. Then another type of nitrifiers called Nitrobacter convert the nitrites (NO2) to nitrates (NO3).

Nitrifying bacteria are attached-growth organisms, so they need surfaces to grow on. The more surface area is available in the lagoon, the more nitrifiers the system can cultivate. Plus, nitrifiers are temperature sensitive. The colder it gets, the less they work. A lagoon system may be able to achieve sufficient nitrification during the summer but struggle during the winter.

Our Lagoons Do It Better YouTube channel has several videos on lagoon ammonia, including this one that outlines the the key factors for lagoon nitrification: 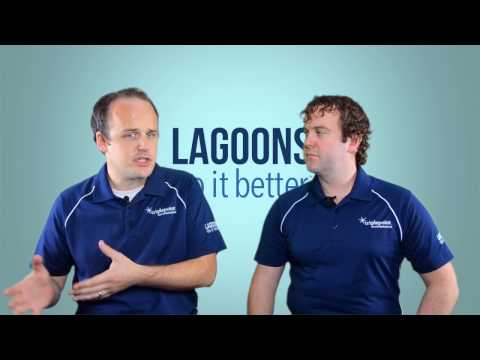 If your lagoon permit only restricts NH3, you’re done. There is still nitrogen in the lagoon, but it has been converted from toxic ammonia to nitrates.

The Problem with Nitrates

According to a recent article on wateronline.com, drinking water in 49 states is contaminated with nitrates, which can cause health problems, especially in babies. Facilities whose effluent, through discharge or land application, contributes high levels of nitrates into groundwater may have a more restrictive nitrogen permit. Permits that include limits for TN, TKN, or TIN will require an additional step to convert the nitrates (NO3) to nitrogen gas (N2), which is then stripped to the atmosphere.

The recipe for denitrification is

Denitrifying bacteria require a low oxygen environment and need soluble BOD. Since there is little BOD remaining after the nitrification process, an external carbon source (such as glycerin or methanol) is added to the reactor to ensure the denitrifying bacteria have enough food. To consume the BOD, denitrifiers require an oxygen source. In the absence of DO, they get it by stripping the oxygen from the nitrate molecules, converting them to nitrogen gas.

Lagoon systems can be upgraded to meet low ammonia and nitrogen effluent limits. Triplepoint’s NitrOx® Process is a two-stage reactor that optimizes conditions for biological nitrification. Through mixing and aeration, controlling temperature, and maximizing surface area for nitrifiers to grow on, NitrOx ensures rapid ammonia removal in any weather.

For more information on how Triplepoint can help your lagoon meet lagoon nitrogen or ammonia limits, download the NitrOx and NitrOx+D brochures or contact us.