Facultative lagoon systems are common for wastewater treatment in small communities. In areas with inexpensive available land, this type of facility offers low operational and maintenance requirements and reliable treatment. However, new ammonia limits have put many communities in danger of noncompliance.

This video case study was shot with a 360° camera—watch it with VR goggles for an immersive experience, or simply use your finger or mouse to rotate the view. 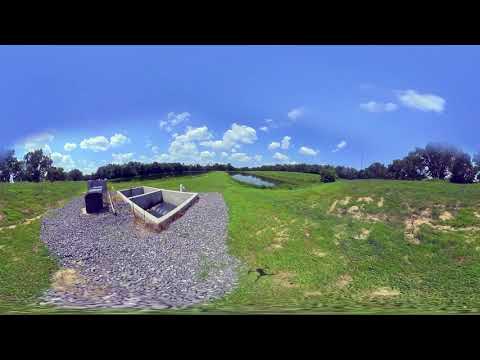 What Is a Facultative Lagoon?

In the diagram above, taken from Julie Hartwig’s excellent webinar on Lagoon Microbiology (available here), the obligate aerobes (bacteria that require oxygen) are clustered near the top of the test tube, where the oxygen is; and the obligate anaerobes (or bacteria that can’t live in water with oxygen) are down in the bottom, where there is no oxygen. The facultative bacteria are found throughout the tube, with a slightly higher density at the top because they are more efficient in aerobic conditions.

The aerobic zone—or top one to two feet—of a facultative lagoon contains dissolved oxygen provided by algae and wind action and performs most of the BOD and nutrient removal.

The anaerobic layer at the bottom of a facultative lagoon stores and slowly digests sludge and traps metals and nutrients.

Between these two zones is the anoxic, or facultative, zone which has some oxygen tied up in compounds like nitrate (NO3), nitrite (NO2), and sulfur (SO3). The anoxic zone helps to remove the odor-producing sulfur compounds generated by anaerobic digestion and also contributes some BOD and nutrient removal.

Facultative lagoons tend to be shallow—4 to 8 feet deep—and large, to provide surface area for oxygen transfer and to cultivate the algae that provide much of the oxygen. Hydraulic detention time is long—often upward of 120 days—to ensure sufficient treatment.

According to the EPA’s Wastewater Technology Fact Sheet on Facultative Lagoons, these systems are “partially reliable in performance.” Although BOD removal is usually satisfactory, facultative lagoons are unable to meet low effluent ammonia limits, especially during the winter, and will require an upgrade to remove ammonia.

Benton, Missouri, is a small town of 900 in the southeast corner of the state, just a few miles south of Cape Girardeau. Their wastewater is treated by a three-cell facultative lagoon system: two main lagoons separated by a berm with one lagoon divided into two cells. The lagoon system has an average flow of 83,000 gallons per day.

Like many Missouri municipalities, Benton was faced with new ammonia limits—1.2 mg/L in summer and 2.7 mg/L in winter—which went into effect in October 2019. Although otherwise providing adequate treatment, the lagoon system would be unable to meet these new limits, especially during the winter, when cold temperatures inhibit nitrifying bacteria.

Benton considered other technologies for lagoon ammonia removal, including in-lagoon media and covers for heat retention, but found them to be cost prohibitive. They opted instead for Triplepoint’s NitrOx System because:

The NitrOx Reactor was installed between Cells 1 and 2. After BOD treatment, effluent from Cell 1 is gravity-fed to the NitrOx; flow is then returned to Cell 2 for polishing. Unlike other lagoon ammonia removal technologies, NitrOx has a small footprint and tucks into the existing site.

Triplepoint’s patented NitrOx Lagoon Ammonia Reactor solves the temperature issue by heating the influent, only when needed and just enough to ensure biological nitrification. Because the temperature increase is minor, to a target between 36.5 and 41° F, and is only required a few months per year, energy costs are kept to a minimum. Temperature is regulated automatically, too, preserving the ease of operation of the lagoon system.

By choosing NitrOx, Benton did not have to purchase additional land or media, and would be assured of year round ammonia removal to meet their permit.

For more information about NitrOx and how it works, visit our NitrOx page and download the NitrOx brochure.