Land application is the most common disposal method for treated wastewater in the U.S., and is the preferred method in many states. Land applying effluent can reduce demand for fresh water, provide nutrients to soil, and keep potential contaminants out of waterways. For lagoons, it may also be a way to avoid having to meet ammonia discharge limits. Watch our video on the pros and cons of land application for lagoon effluent and read below for highlights. 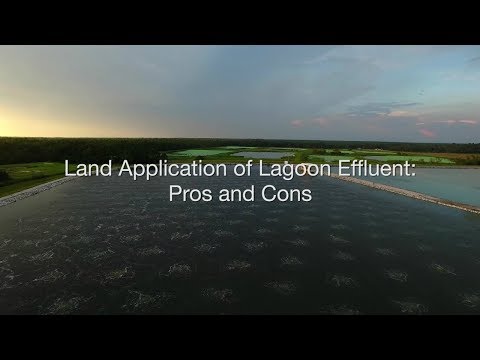 Slow rate: The most common type of land application; techniques include spraying, flooding, or ridge and furrow application. Plants uptake water and nutrients and the excess transfers to soil via adsorption and is broken down by microbial action.

Rapid infiltration is used after secondary and advanced wastewater treatment. Large amounts of effluent are applied to permeable soils and percolate through to the water table.

Subsurface drip: A relatively new technique wherein buried irrigation lines, which can be planted over, slowly drip water into the soil.

Overland flow, where effluent is applied to a sloped area and recaptured at the bottom, is not addressed in our video because it’s considered a method of treatment rather than disposal.

The EPA’s Process Design Manual for Land Treatment of Municipal Wastewater Effluents offers a detailed look at all aspects of land application.

Land application can be an attractive option for lagoon facilities as it eliminates the need to remove ammonia before surface discharge. As we’ve discussed in previous blogs, lagoons weren’t designed to remove ammonia, so new limits can be burdensome, especially for smaller municipalities.

However, converting to land application from discharge is not always as simple as it sounds, so it’s important to be aware of potential drawbacks. Following are the advantages and disadvantages of land application of lagoon effluent.

Especially in arid and water-challenged regions, the benefits of land application can outweigh the drawbacks. Still, it’s important to optimize treatment in the lagoon cells.

A study published in the Journal of Irrigation and Drainage Engineering concluded that “the overall performance of a natural wastewater treatment system consisting of an aerated pond system followed by land application…cannot only meet regulatory requirements for discharge, but exceed those requirements.”

The aeration component of the system is a critical part of its success. Lagoon treatment with mechanical aeration and mixing, like Triplepoint’s Ares Aerator®.

The EPA recommends land application for wastewater effluent because it recycles organic matter and nutrients and helps to conserve freshwater resources. Converting a lagoon system from discharge to land application can allow a facility to avoid having to meet an ammonia limit, but it’s important to be mindful of the costs and requirements. Once you calculate the upfront investment for land acquisition, as well as the ongoing maintenance expense, you may find it more economical in the long run to add a lagoon ammonia removal process like Triplepoint’s NitrOx® System.

Triplepoint’s NitrOx is incorporated into a lagoon facility for the sole purpose of ammonia removal. Typically, the NitrOx reactor is added near the end of the treatment process, prior to discharge. Effluent flows through two complete-mix aeration cells that have a dense concentration of nitrifiers allowing for rapid nitrification in a small footprint. The NitrOx system, through controlled thermal regulation, biomass, mixing, and aeration, can nitrify in any weather.

Because NitrOx leverages the existing lagoon system, capital costs are kept low to minimize the financial burden of plant upgrades.